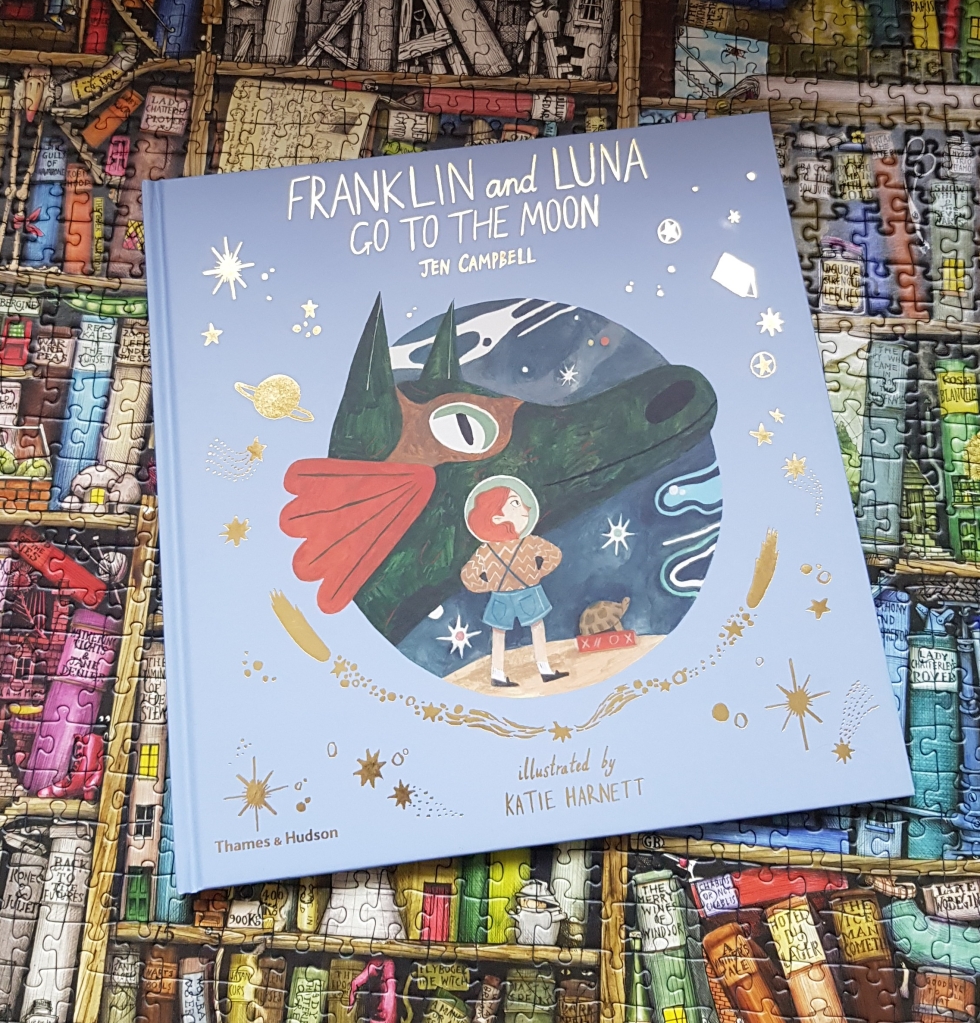 Franklin and Luna go to the Moon by Jen Campbell, illustrated by Katie Harnett

Luna’s best friend, Franklin, is a dragon. They love to read stories about everything from trampolining to deep-sea diving. One day, they are reading about where werewolves live and Franklin begins to wonder where he is from. He is 605 years old and has no idea where to find other dragons!

Luna suggests that they go on an adventure to find his family. They Google his family tree, they e-mail a princess, and along the way they find twenty yetis eating spaghetti, five vampires reading Shakespeare, not to mention disco-dancing unicorns . . . but no dragons!

Where on earth could they be?

Following the success of Franklin’s Flying Bookshop, Franklin and Luna Go to the Moon― a book about the joys of reading, exploring, and coming home― continues to bring the magic of classic fairy tales into the twenty-first century.

When I saw there was a “sequel” to Franklin’s Flying Bookshop, I had to buy it! When it arrived the box was huge, so I was surpsied by it.

The artwork is still very cool, and now we aren’t setting up a bookshop (they did that in the first book), but we are finding out what they do now that they are good friends and that they read a lot. All kinds of adventures, but then they try to find Franklin’s family and just seem to not get much out anyhting (there’s a hint here of Nessie, the Loch Ness monster which I found cute).

Then they wonder if maybe there is something in the moon, so why not try to fly there? (nevermind science, it is a dragon, right?) They get to the moon and they find dragons!

The artwork is still super cute, but the story wasn’t as nice and cute as the first one. I wasn’t into it as much as I was for the bookshop one and thought I liked the idea of finding more of Franklin’s family, when we find the dragons I wasn’t elated or excited about it. I guess that defines the fact I just didn’t engage as well with it, which is sad because I was really looking forward to it.

However I can still recommend wholeheartedly the first book.

“Whilst leaving footpaths should NEVER be done,
Straying from stories is all sorts of fun!

Little Red Reading Hood LOVES reading books and making up stories of her own. When she meets a cunning wolf while on her way to the library, he convinces her to stray from the path and read for a little while. But hasn’t she read this in a story before? Perhaps it’s time she came up with a new ending . . .

Sometimes I really fancy reading a short illustrated book. And most of those times I want a satisfying easy story with gorgeous artwork. This little book has that.

It is a retelling of Red Riding Hood but this time it includes books, and a visit to the library! (Overdue books are bad!) It rhymes (I find that I enjoy easy rhymes where it isn’t “fancy poetry” but just a simple rhyme that tells a story well. Also, rhyming in English is painful! This requires a lot of skill). The interactions and rhymes made me laugh and smile and as I caught on that it rhymed, I kept trying to guess what the next line would say and what word it’d end with. (Wow, that’s a lot of variations on a single word, I’ll run with it!)

The colour palette of the artwork is quite magical and is good at providing “context”. Library, stories, woods, all have different tones but it all matches and works well together. Very pleasant story and the end made me smile and go “yeah, I like that, it is a good ending”.

(Sometimes it is hard to rave about picture books when you try to not include spoilers and also admire the artwork. I choose either for story or artwork, sometimes I get lucky and get both, like this time.)

The Clockwork Dragon by Jonathan Emmett

The Kingdom of Rodney is being terrorised by Flamethrottle the dragon. Fortunately Max, a young toymaker, and Lizzie, an armourer, are more than a match for this man-eating monster and the two of them come up with a clever plan to drive it away.
llustrated by Elys Dolan, the creator of Weasels!

Other than the fact the start of the book made me feel like I had lost a page somewhere (and I genuinely had to look back to the title page and then first page, then back again just to be sure), this is a very cute book. Max likes making mechanical toys which his boxx doesn’t like much, but Max is clever and he finds Lizzie the armourer to help with a crazy plan to defeat the dragon that is eating all the knights and hoarding tresure up the mountain.

The illustrations are really lovely, and just the fact that there’s two dragons in this book was awesome (all the dragons, right?!). The Clockwork dragon is so cool and I wish there was a real one (as in one made of clockwork and all that) that I could have.

I really liked the creativity in the story, and it was a feel good hero/heroine book. With dragons.

This reminds me a little of The Princess and the Pony, which I reviewed a while back (a long time ago) in the style of knight/princess story with a twist.

As soon as I saw this book I knew I had to buy it.

Franklin the dragon loves stories and loves reading stories to people too, but everyone is too scared to even talk to him. One day, he meets a girl named Luna who, rather than being afraid, is fascinated to meet Franklin, having recently read all about dragons in one of her books. They instantly become friends and talk nonstop about what they’ve read: books about roller-skating, King Arthur, spiders, and how to do kung fu. Together they hatch a plan to share their love of books with others by opening a bookshop―a flying bookshop, that is―right on Franklin’s back!

Franklin, a well-read and peace-loving dragon, and Luna, a young girl with an independent spirit and an insatiable love of reading, make fantastic role models for young children. Franklin’s Flying Bookshop brings the magic of classic fairy tales into the twenty-first century through exquisite illustrations, and will enchant children as well as anyone who loves books.

Reasons I loved this book:

It is a really cute book with gorgeous illustrations (it is also a BIG book) and the wording is perfect for read out loud storytime. It made me laugh and it made me want to go to Franklin’s town and fly in the bookshop (how cool is that?).

You try this book out, it is utterly gorgeous. I’m not that good at recommending children’s books but I can recommend the Dragonology book which is about the same size and makes a great companion. Any extra dragon books are a good idea. But do get this one, it is ever so lovely, and the illustrations.

If you’d like to buy a copy for yourself, you can find it here.

Disclaimer: There is an Amazon Associates link, but if you choose to use them and buy from them, know that you’re just helping me buy more books and feed my reading needs. Book synopsis is from Good Reads.