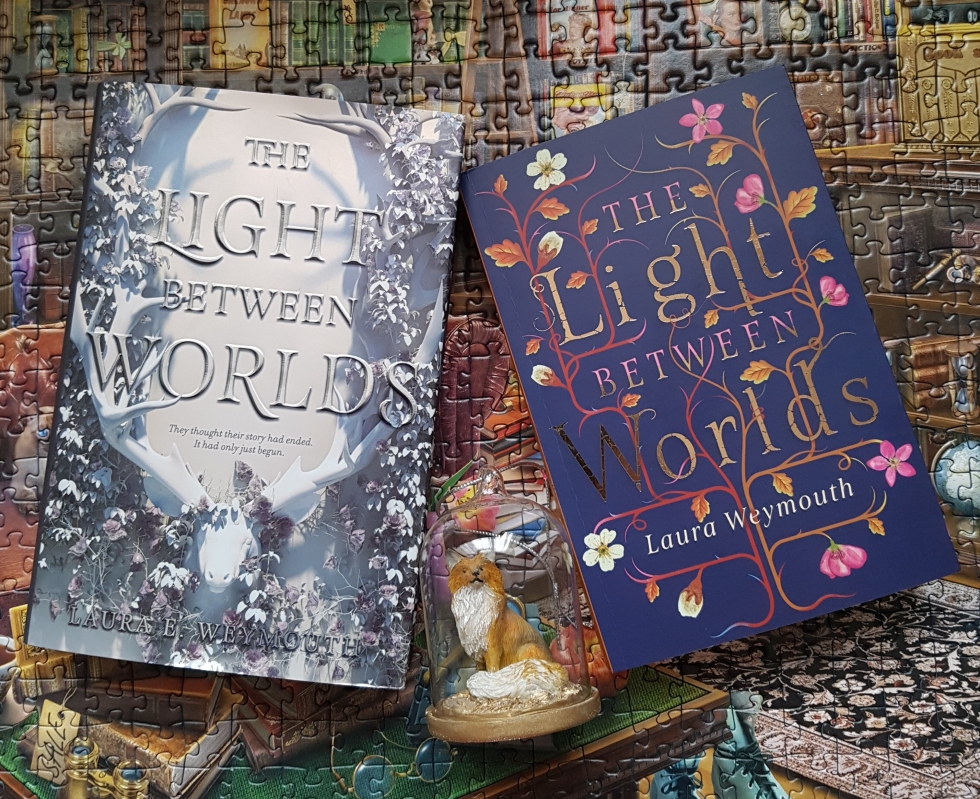 The Light Between Worlds by Laura Weymouth

Five years ago, Evelyn and Philippa Hapwell cowered from air strikes in a London bomb shelter. But that night took a turn when the sisters were transported to another realm called the Woodlands. In a forest kingdom populated by creatures out of myth and legend, they found temporary refuge.

When they finally returned to London, nothing had changed at all—nothing, except themselves.

Now, Ev spends her days sneaking into the woods outside her boarding school, wishing for the Woodlands. Overcome with longing, she is desperate to return no matter what it takes.

Philippa, on the other hand, is determined to find a place in this world. She shields herself behind a flawless exterior and countless friends, and moves to America to escape the memory of what was.

But when Evelyn goes missing, Philippa must confront the depth of her sister’s despair and the painful truths they’ve been running from. As the weeks unfold, Philippa wonders if Ev truly did find a way home, or if the weight of their worlds pulled her under.

This was one of my highly anticipated autumn/winter reads. I bought a book twice at YALC just so I could get the ARC for it. Then I somehow managed to preorder twice, realised it came inside Book Box Club Fantasy Lands, cancelled the UK preorder and forgot I had a US version preorder. So I ended up with two copies (which are actually slightly different, with them starting completely different and you never get to read that first chapter of the US edition in the UK one).

The writing itself is wonderful and flows. A very few times I wanted to skip some of the descriptions but that has got more to do with the fact that I know the places where things are happening and as such require no description (say London, yes, it is post war London, but I have read a lot of WWII books and been in Lonodn and done museums, so it isn’t something new to me). Still, that’s not the point. It was easy and fast to read, immersive.

Now on to the story, and please excuse me, I’ve been trying to write this part of the review in my head so many times and I just can’t help but mix the story with real life (my real life, sorry).

The story starts with Evelyn’s (Ev, Evie) side of the story. She wants to return to the Woodlands, and that’s that. I understand part of Evie, as I have had depression, I have struggled with motivating myself to be here. I get that, however, you get the back story of how life was in the Woodlands and how life is in the present., and the only thing that is really different for Evelyn is the lack of “magic” and Cervus. And that she isn’t putting any effort whatsoever in having a life here, which she did a little bit more in the Woodlands. So she’s unhappy because in her head Woodlands = much better. However, from my own way of reading the book, Englad would’ve been perfectly fine and even better than the Woodlands if Evelyn had only just actually tried. But after coming back from the Woodlands, she decides she wants that and not this life, so who cares? Zero effort, therefore, nothing to actually motivate her to stay here. This annoyed me a LOT. And it was even worse because I saw my little sister in her.

When we were young, close to Phillipa’s and Evie’s age, life happens and my sister was depressed and boy did I fight a battle for her. As hard as Phil did, so did I, and my sister didn’t care. She set herself on a path of self destruction, angry because I cared, angry when I stopped trying to hold her up. I could never win. And in the end, I also left (but I moved from the continent of America to the UK, so I did the inverse). But because I knew I was leaving, I did what I thought was best (after covering for her, and her self harm, and destructive life). I told the truth to my mother, who didn’t believe me but once she saw facts and reality, she took my sister into her wing. This made her angry and we had a very strained relationship for a very long time. Today we talk, and we’re sisters, but there’s not much there. And of course, she realised there wasn’t any “Woodlands” for her to go to, so she ended up putting some effort. But she still treats the world and life as a bothersome thing and barely makes an effort and expects everything handed in a plate.

So it broke my hear to read Ev’s story, because I knew exactly where she was going. I had saved my own little sister too many times, so this was familiar grounds. Evelyn decides not even Tom is worth it because she doesn’t actually want anything good from this world, Woodlands is better (even though she didn’t have many friends, kept to herself, and did almost the same activities than in England, sans school). So she decides enough is enough, time to stop just self harming to feel something (one of the things that I struggled with is that she self harms in the Woodlands, and brings that with her, so in general, the Woodlands were toxic for her yet she seems them as “perfect”).

Then we get Phil. Who has been making penance in the Woodlands, and after the Woodlands and even gives herself an ulcer trying to save Ev several times, and to hide all the crazy bad things she does. Because she believes in her. And of course I saw myself a lot in her. She talks about the fact that if she didn’t get busy she would fall apart. And that’s the thing, I am the same. After a life changing event, that left me homeless, unemployed, without apenny to my name and in a foreign country, I knew I could let myself fall apart like Ev, but instead I became busy, kept myself going so that the pieces wouldn’t just scatter. And that helped, it pushed me through and helped me survive some very difficult times.I do not do pumps and powder as my armour. But organising and being able and there became my go to (and even now, I do, I keep busy, I actually do fall apart a little if I don’t have something to do, which isn’t great, but at least it is somewhat productive).

It was hard to read about Phil’s story because you can see all the effort, all the help she tries to give, how much she is working hard not just for herself, but actually, mostly for her sister. There is so much love in there (which sadly Evie seems to not notice or brush aside, because Woodlands).

When I finished the story, I was almost in tears. I felt as if Laura (who had already welcomed me into clan Weymouth, we both keep chickens) had travelled back to my past and written about me and my sister (who now goes by the name Laura, which is weird for me as I called her something else all her life) and added a magical aspect. It was cathartic, and odd, and sad and glad. Such a mix of feelings I didn’t expect in this book.

Also, I love the male characters in this book. They’re flawed, and they are so far away from the bad boy stereotype that it was a relief and some good fresh air to read. Tom and Jack and even Jamie, are all trying to live, to move forward, and they are such sweet men. I loved them all.

Also, this is probably my longest review, woops.

Definitely read The Light Between Worlds. If you don’t mind the religious bits in it, Narnia is a good idea too (My favourite ones are The Horse and His Boy & The Silver Chair). I can also recommend some other books that have impacted me very much. Try After The Fire by Will Hill. Or White Rabbit, Red Wolf by Tom Pollock. Lastly, my absolute favourite, the Damar duology, The Blue Sword and The Hero and The Crown by Robin McKinley.

One thought on “The Light Between Worlds Review”