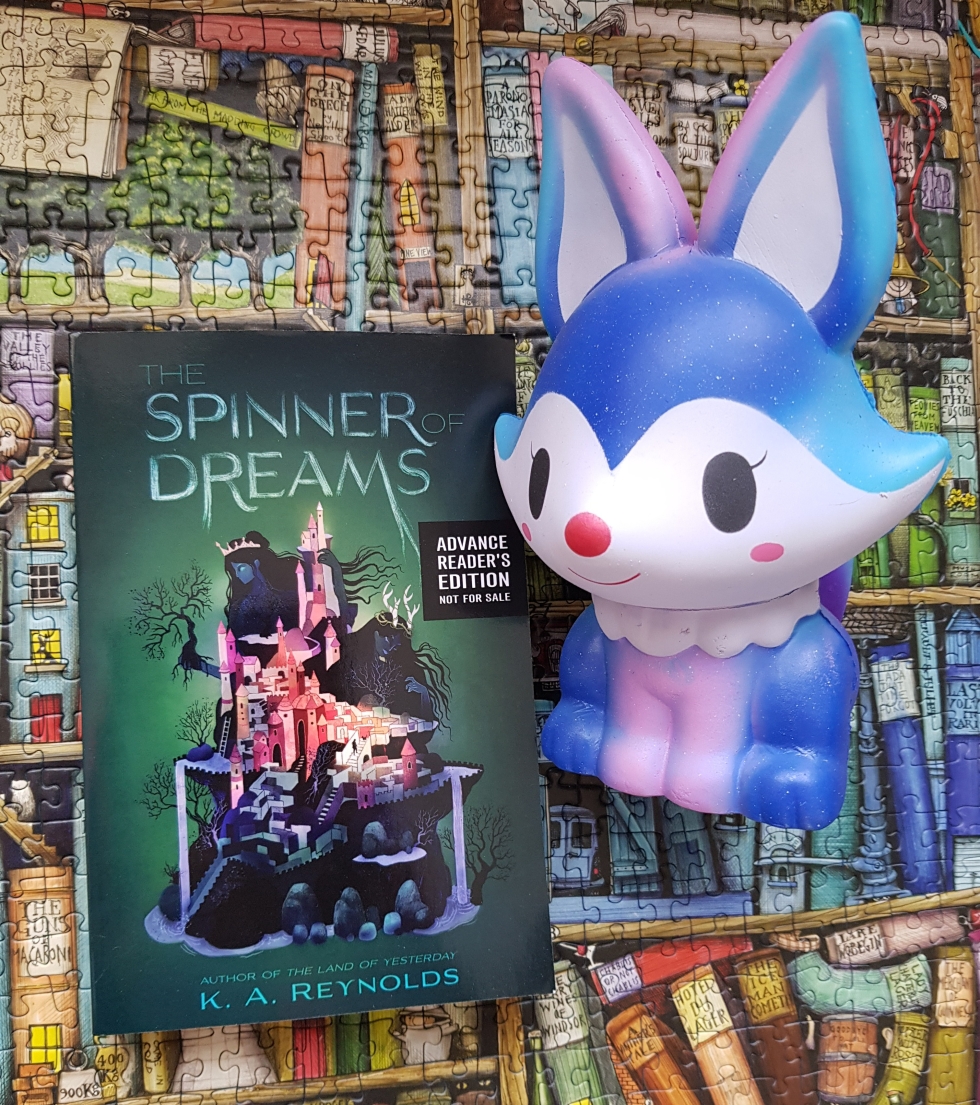 The Spinner of Dreams by K. A. Reynolds

Cursed at birth by the devious Fate Spinner, Annalise has always lived a solitary life with her loving parents. She does her best to ignore the cruel townsfolk of her desolate town–but the black mark on her hand won’t be ignored.

Not when the monster living within it, which seems to have an agenda of its own, grows more unpredictable each day.

There’s only one way for Annalise to rid herself of her curse: to enter the Labyrinth of Fate and Dreams and defeat the Fate Spinner. So despite her anxiety, Annalise sets out to undo the curse that’s defined her–and to show the world, and herself, exactly who she is inside.

I had preordered this lovely book at the start of the year when I did a huge sweep of books to preorder, and then the lovely Asha (@cat_book_tea) had an ARC and thought I would love (which made me smile because I already thought I’d love it, so yay!). And then the author did a giveaway and I won a digital copy of it.

Due to my photosensitivity I rarely ever read anything in digital format and do not accept review copies of this kind (plus, I prefer if someone who may actually read it in that format gets a chance for it instead of “gathering electrical dust”). So I politely mentioned this to her, and lo and behold. I now have a physical copy. I felt SO seen, which automatically made me smile whenever I picked this proof copy.

But now unto the actual contents of the book. This is a middle grade book and boy! It is the kind of book I wish I had written, you know how they say, “write the books you want to read”? Well, my child/teen self would’ve loved to read this book at the time. This is the book that the me then should’ve written. And now I have written myself into a loop of writing. Nevermind that.

We start with the introduction to what, or rather who, the Fate and Dream Spinner are. You could say we start with a “fairytale”. Then we get a “more in reality” view, and finally, we meet Annalise, our main character (MC). She has purple hair (loved it!) and is cursed. The day she was born lots of bad things happened and the whole town hates her, despite how much she tries to be kind and nice (and she is, not just tries). Then hope appears and things go a bit wrong, so she decides she has to challenge the Fate Spinner, solve the Labyrinth and ask the Dream Spinner to fulfill her dream (to rule her own destiny).

And that way we begin the quest to find the way to the labyrinth first of all (I liked that this has to be done rather than just wishing and ending up in front of the Labyrinth). Along the way we meet Muse, a talking cat with a hat and monocle (huge huge Ghibli vibes from Muse, and I absolutely loved that!). We also meet Mr. Edwards, a fox also wanting to make his dream come true alongside his husband fox, Mr. Amorieux.

The labyrinth is a good quest plot, and it kept me entretained, and also rooting for each fo the characters, including the minor ones (like trees, or a cockatrice, or a pair of siblings). The character growth of Annalise is gradual, and that was something I appreciated, as sometimes the character has this magic shortcut to growth and that is that. Annalise has magic, but it is a curse in her hand, so not exactly the nice shortcut.

Another thing that made me treasure this book more was that Annalise struggled with anxiety and panic attacks. She counts in fours. I do that too. Either with my breaths or counting in German 1,2,3,4… 5,6,7,8… then restart. The German counting is the only one that kinda goes beyond four, but I do it in chunks of four. So it was nice to see that and easily identify with her.

All the little or big plot twists fit well and none felt too crazy (I figured a few out, one I got it slightly wrong, but the “nature” of it I had right). The world building is also precise, even if you only get a glimpse of it. And I found the characters charming.

Basically, everyone should read this book and maybe eat some nice cake with it. With a lovely cup of tea. Enjoy!

One thought on “The Spinner of Dreams Review”